I would like to take you on a journey to the various locations my characters visit in their quest for the gods. The places existed in antiquity and some are more famous than others. Like any sojourn, either real or fictional, it’s the experiences gained that are valuable. We may not know why some places mean more than others, but in time, whether it’s in a few weeks, months or years, we figure it out. 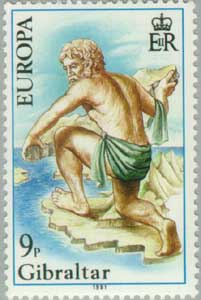 The Pillars of Herakles, today known as the Straits of Gibraltar, was given its name by the ancients and to Herakles who created them. It also links the Mediterranean Sea to the Atlantic Ocean. In antiquity, the pillars also denoted the limits of the world and historically, this is where they were. I’m not here to refute or make a claim as to where they were, only that it worked well into my story to have the pillars as markers between the new and old world.

According to myth, and there are many different variations of the legend, Herakles was sent to retrieve a herd of red-skinned cattle from the lands of Erytheia, an island in the ‘far’ west. ‘Its neighbours included Hesperia the garden of the gods, Sarpedon island of the Gorgones, and Leuke the island-home of the blessed dead. Even further to the west, on the far shores of the river Okeanos, lay the gloomy realm of Haides.’  On his way west, and between Libya and Europe, he erected two pillars on the two sides of Gibraltar. Now Libya, as we know it today, is nowhere near the straits. This where political licence and limited knowledge of geographical regions of the time is given latitude.

In relation to my story, my characters travel from  the Great Ocean (the Atlantic) and head towards the Mediterranean via the pillars.