In recent years due to the increasing popularity of cooking shows, a number of ‘cooks’ have become famous, with Nigella Lawson as prime example. Of course Julia Childs must be included, she did pave the way for cooking shows on television. But credit must be given to Hestia, Goddess of the Hearth. If it wasn’t for Hestia, the concept of home and hearth would perhaps never be realised. 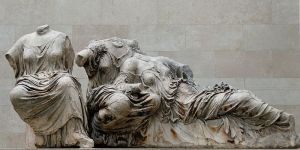 Hestia, Dione and Aphrodite, from Parthenon east pediment
by Phidias between circa 447 and circa 433 BC

Hestia was the first-born daughter of the Titans’ Rhea and Kronos. She was the first to be swallowed by her father, and the last to be disgorged. In turn, she was named the eldest and the youngest of the six siblings. She was one of the original Olympian Gods and later was replaced by Dionysos. As compensation for being ‘dethroned’ she tended to the sacred fire on Mt. Olympos.

Her name means ‘hearth and home’ which the ancient Greeks considered sacrosanct. Hestia, as a goddess, was regarded very highly as she epitomised domesticity in the home and the giver of all domestic happiness and blessings. For the Greeks, the hearth was the centre of home life. Every house had an altar dedicated to Hestia and another god. When sacrifices were offered, she was the first one to be honoured and in return the supplicant asked for protection of those who resided in the house. A one year old cow was offered to the goddess as well as fruit, wine and oil. Items commonly used in all households.

Each town or city-state had a hearth which symbolised harmony in the community and a common worship. The hearth existed in a prytaneium (akin to a community centre or public hall) and location of Hestia’s sanctuary. When foreign ambassadors or guests arrived, they would be received in the prytaneium. If the flames in hearth died out, it could not be reignited with ordinary fire. The only accepted way was to create friction or use ‘burning glass’ (mirrors) to capture the sun’s rays. This method was considered pure and a gift from the gods. As part of the expansion programme, the ancient Greeks sent citizens to set up new colonies. The emigrants would take fire from the hearth of their mother-city and bring it to their new home.

Hestia, like Artemis and Athene, was a maiden divinity, though Apollo and Poseidon did try to win her over and wanted to marry her. She refused and vowed to remain a virgin.

There isn’t a lot of information on Hestia, despite her importance to the ancient Greeks, though there are a few good sites if you wish to learn more.
http://www.goddessgift.com/goddess-myths/greek_goddess_hestia.htm
http://www.newworldencyclopedia.org/entry/Hestia

Next is Artemis, the goddess of hunting. If you have questions or requests, please ask.