Pandora was the first woman created out of clay by the gods. Her name means ‘all gifts’ (pan, doros) as she was endowed with the various attributes from each of the gods. The gods with their multi-faceted behaviours had in fact produced a human in their own image. One of the earliest literary versions of the Pandora story appears in Hesiod’s poetry; Theogony – one line and in his Works and Days. In an older version still, Homer’s Iliad, he didn’t mention Pandora though did recite lines about urns that contained blessings and troubles which plague humanity.

The immortals know no care, yet the lot they spin for man is full of sorrow; on the floor of Zeus’ palace there stand two urns, the one filled with evil gifts, and the other with good ones. He for whom Zeus the lord of thunder mixes the gifts he sends, will meet now with good and now with evil fortune; but he to whom Zeus sends none but evil gifts will be pointed at by the finger of scorn, the hand of famine will pursue him to the ends of the world, and he will go up and down the face of the earth, respected neither by gods nor men.
Homer, Iliad 24:527

The premise of the Pandora myth was to explain to the people of the day as to why there was malevolence in the world. Such a dramatic telling instilled not only fear but a semblance of understand about the actions of a few. Why was a female the main protagonist? Hesiod believed women were the bane of man’s life.

From her is the race of women and female kind:
of her is the deadly race and tribe of women who
live amongst mortal men to their great trouble,
no helpmates in hateful poverty, but only in wealth.
Hesiod, Work and Days, 590-93

The most interesting fact which came out of my research on Pandora was learning the word ‘box’ was incorrectly interpreted. A pithos, a large storage jar which was used for wine, oil and grain was mistranslated into the Latin word pyxis, meaning ‘box’. The person, who made the mistake, was Erasmus of Rotterdam.

In her words:
My name is Pandora, the one who released into the world all manner of ills. Have you ever wondered why people behave in ways contrary to the norm? Let me tell you why.

Zeus gifted me with curiosity, how could I not open the urn? Why did he offer an object that would create disharmony and ruin? It was his way to reprimand Prometheos for stealing fire from the gods but also to punish man.

I may have been the catalyst for the trials brought upon humans but cannot be blamed for their actions. People are responsible for what they do and casting fault onto others is cowardly. This cycle has no end for as long as a person does harm to another and does not learn how to stop or believe in repentance, then it continues.

I am but a reminder of the transgressions and the effects it has on communities. 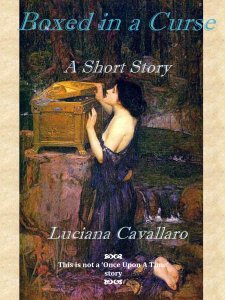