There are a number of plot twists in the Iliad, causation’s for many key events in the story. Each have a significant role in the final outcome of the story and perhaps one of the more pivotal scenes was the death of Patroklos. It changed the losing team into a winning one and saw the annihilation of a city and its people. 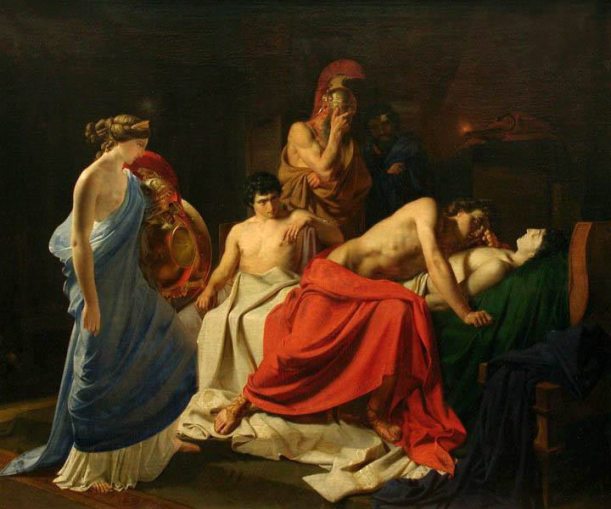 Achilles and the body of Patroclus
Nikolai Ge 1855
Wikipedia

Who was Patroklos? He was not only a boyhood friend of Akhilleus but also a relative. There’s also the inference they were lovers which was possible as it was common in ancient Greece and much of the ancient world to have same sex relationships. Unlike the movie Troy where the character of Patroklos was younger, he was older than Akhilleus, though it was never mentioned by how much.

He was considered wiser and more level-headed than Akhilleus, which was why Nestor approached Patroklos. He suggested Patroklus should advise Akhilleus to re-join the war and reiterated the words of his father, Menoetius on the day they left to join the allies:

‘My son, Achilles is of nobler birth than you and he is also by far the stronger man. But you are older than he is. It is for you to give sound advice, make suggestions and give him a lead which he will follow to his own advantage.’
Iliad, Book 11, Lines 785-89

While he was a boy, Patroklos killed a youth during a game of dice. How? It was never explained except it was an accident. Dangerous game by the sounds of it! As a consequence his father, brother or first cousin to Peleus Akhilleus’ father, sent Patroklos to live with the king. Both he and Akhilleus were educated together. Patroklos, a prince in his own right, was one of Helen’s suitors and bound by oath to take up arms if something amiss happened.

In Book 16, Patroklos tries to convince Akhilleus to re-join the fight. The Achaeans suffered heavy losses and without Akhilleus were certain to lose. He refuses. However, Patroklos persuades his friend to let him borrow his armour and lead the Myrmidons into the fray. Patroklos and his men charge into the fight, rallying the Greeks, who thought he was Akhilleus. He was a competent warrior and killed many men in the battle including the king of Lycia, Sarpedon who happened to be the son of Zeus. Then he faced Hektor.

‘[Hektor]… stabbed him with his spear in the lower belly, driving the bronze clean through. Patroklos thudded to the ground…’
Iliad, Book 16, Lines 821-822

Patroklos showed great strength of character and virtue, elements which Akhilleus did not possess. The character of Patroklos demonstrated a person didn’t need to be the best warrior, however goodness and integrity was more important.

Thank you for visiting and reading. Hope you enjoyed the post. As always, I look forward to your comments.