I am very excited about this blog post as it’s all about historical fiction and just in time for Christmas. It’s not often I get to participate alongside notable and talented indie/traditional writers in the same genre. Yet like fingerprints, the stories told are unique and as varied as the many flavours of tea. There’s something for everyone. Each book listed, including mine, will be on sale from the 1st to 8th December for 99c – US. If you need to fill the ole Christmas stocking, there is nothing better than ebooks. After you’ve eaten a wonderful and fulfilling Christmas lunch and/or dinner, why not curl up with an ebook? If you haven’t slipped into a food coma, that is.

I will introduce you to my fellow historical fiction writers in a little bit but first I wish to give a little information about my book.

Search for the Golden Serpent was published earlier this year in May. The idea for the story was born 15 years ago when I first travelled to Europe and after watching Gladiator. Then the movie Troy was released. Okay, I know it isn’t the best telling of the Iliad but I still enjoyed watching it. It was the combination of my trip and movies that germinated the story, which has grown into a trilogy. I am currently working on book 2 and have the outline for book 3. 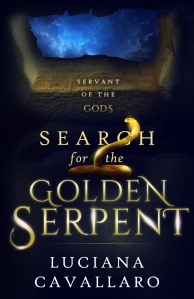 The story is set in 600 BCE and based on Ancient Greece and mythology. It is about a 21st century architect who is catapulted back in time to prevent the rising of a new religion: Christianity. Evan/Evandros has a series of strange dreams and experiences blackouts. It is during one blackout where he is visited by Zeus, King of the Gods who tells him he was born 3000 years ago and needs to go back home to help his Family. Evan thinks he’s going crazy, seeks specialist help until one day he finds himself adrift in the middle of the Mediterranean Sea, amongst the debris of a destroyed ship. To return home, he must risk his life in search of powerful, sacred relics older than the Holy Grail. But what he finds might be more than he expected.

The story is based on the Atlantis myth as written by Plato and the Minoan culture. Anyone who has been following my blog will know my fascination for both subjects. The myth of Atlantis has been with me since I was 15 years old and my interest in Minoan history was inspired from my visit to Knossos and to Santorini. Both islands feature in books 2 and 3 in the Servant of the Gods series.

Now for a great HOLIDAY treat. My fellow historical fiction authors have each posted about their book and the period in which their books are set. To learn more about them and their books, read on and then click on their website links for more information. Purchase links have been added for your convenience.

A Similar Taste in Books – by Linda Banche

Historical Period: Regency
Synopsis:
Book 1 of Love and the Library: Clara and Justin
“Pride and Prejudice” has always brought lovers together, even in the Regency.
Justin has a deep, dark secret—he likes that most despised form of literature, the novel. His favorite novel is “Pride and Prejudice”, and, especially, Miss Elizabeth Bennet. Intelligent, lively, fiercely loyal Miss Elizabeth. How he would love to meet a lady like her.
Clara’s favorite novel is “Pride and Prejudice” and Mr. Fitzwilliam Darcy. Intelligent, steadfast and willing to admit when he is wrong. Can such a splendid man exist? And can she find him?
One day in the library, they both check out copies of their favorite book. When Justin bumps into Clara, the magic of their similar taste in books just might make their wishes come true.
A sweet, traditional Regency romantic comedy novella, but not a retelling of “Pride and Prejudice”.

Website: http://lindabanche.blogspot.com
Sales Link: https://www.smashwords.com/books/view/247691
On sale for 99 cents at Smashwords only with coupon code FF67C (not case sensitive)

Kingdom of Rebels – by Derek Birks

Historical Period: Fifteenth Century – the Wars of the Roses
Synopsis:
When all hope is gone, only death lies in wait…
England in 1468 is a nervous kingdom. King Edward IV has fallen out with his chief ally during the Wars of the Roses, the powerful Earl of Warwick.  Ned Elder, a young lord whose sword helped to put Edward on the throne, has been forced out of England by Warwick.
Far away on the Scottish border, a beleaguered fort, Crag Tower, desperately awaits Ned’s return. Led by his fiery sister, Eleanor, the dwindling garrison is all that remains of his brave army of retainers. Unknown to all except the loyal knight, Ragwulf, Eleanor has Ned’s young son in her charge – a son who has never seen his father. But, as border clansmen batter the gates with fire, the castle seems certain to fall.   One by one Ned’s family and friends are caught up in Warwick’s web of treason. The fate of the Elders and those who serve them lies once more in the balance as all are drawn back to Yorkshire where they face old enemies once more. Eleanor can only hope that Ned will soon return. She must fight to keep that hope alive… and when Lady Eleanor fights, she takes no prisoners… 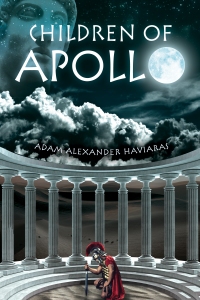 Historical Period:   The Roman Empire, A.D. 202
Synopsis:
At the peak of Rome’s might a dragon is born among eagles, an heir to a line both blessed and cursed by the Gods for ages.
Lucius Metellus Anguis is a young warrior who is inspired by the deeds of his glorious ancestors and burdened by the knowledge that he must raise his family name from the ashes of the past. Having achieved a measure of success in the emperor’s legions in North Africa, Lucius is recalled to Rome where he finds himself surrounded by enemies, cast into the deadly arena of Roman politics.
Amid growing fears of treachery, Lucius meets a young Athenian woman who fills his darkening world with new-found hope. Their love grows, as does their belief that the Gods have planned their meeting, but when an ancient oracle of Apollo utters a terrifying prophecy regarding his future, Lucius’ world is once more thrown into chaos. Ultimately, he must choose sides in a war that threatens to destroy his family, his faith and all that he has worked for. 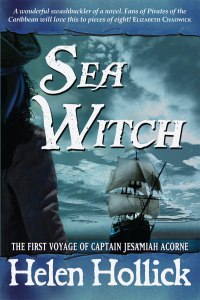 Historical Period: The Golden Age of Piracy – 1716
Synopsis:
Escaping the bullying of his elder half brother, from the age of fifteen Jesamiah Acorne has been a pirate with only two loves – his ship and his freedom. But his life is to change when he and his crewmates unsuccessfully attack a merchant ship off the coast of South Africa.
He is to meet Tiola Oldstagh an insignificant girl, or so he assumes – until she rescues him from a vicious attack, and almost certain death, by pirate hunters. And then he discovers what she really is; a healer, a midwife – and a white witch. Her name, an anagram of “all that is good.” Tiola and Jesamiah become lovers, but the wealthy Stefan van Overstratten, a Cape Town Dutchman, also wants Tiola as his wife and Jesamiah’s jealous brother, Phillipe Mereno, is determined to seek revenge for resentments of the past, a stolen ship and the insult of being cuckolded in his own home.
When the call of the sea and an opportunity to commandeer a beautiful ship – the Sea Witch – is put in Jesamiah’s path he must make a choice between his life as a pirate or his love for Tiola. He wants both, but Mereno and van Overstratten want him dead.
In trouble, imprisoned in the darkness and stench that is the lowest part of his brother’s ship, can Tiola with her gift of Craft, and the aid of his loyal crew, save him?Using all her skills Tiola must conjure up a wind to rescue her lover, but first she must brave the darkness of the ocean depths and confront the supernatural being, Tethys, the Spirit of the Sea, an elemental who will stop at nothing to claim Jesamiah Acorne’s soul and bones as a trophy.

Historic Period: Modern/Roman (alternate history)
Synopsis:
New York, present day, alternate timeline. Karen Brown, angry and frightened after surviving a kidnap attempt, has a harsh choice – being eliminated by government enforcer Jeffery Renschman or fleeing to mysterious Roma Nova, her dead mother’s homeland in Europe.
Founded sixteen centuries ago by Roman exiles and ruled by women, Roma Nova gives Karen safety, at a price, and a ready-made family in a strange culture she often struggles with. Just as she’s finding her feet, a shocking discovery about her new lover, Praetorian special forces officer Conrad Tellus, isolates her.
And the enforcer, Renschman, is stalking her in her new home and nearly kills her. Recovering, she is desperate to find out why this Renschman is hunting her so viciously. Unable to rely on anybody else, she undergoes intensive training, develops fighting skills and becomes an undercover cop. But crazy with bitterness at his past failures, Renschman sets a trap for her, knowing she has no choice but to spring it…

Men of the Cross (Battle Scars I) – by Charlene Newcomb

Historical period: Medieval – 12th century
Synopsis:
War, political intrigue and passion… heroes… friends and lovers… and the seeds for a new Robin Hood legend await you…
Two young knights’  journey to war at Richard the Lionheart’s side sweeps them from England to the Holy Land in this historical adventure set against the backdrop of the Third Crusade.
Henry de Grey leaves Southampton in high spirits, strong in his faith and passionate about the mission to take Jerusalem back from Saladin’s army. Stephan l’Aigle’s prowess on the battlefield is well known, as are his exploits in the arms of other men. He prizes duty, honour and loyalty to his king above all else. But God and the Church? Stephan has little use for either.
Henry’s convictions are challenged by loss and the harsh realities of bloody battles, unforgiving marches, and the politics of the day. Man against man. Man against the elements. Man against his own heart. Survival will depend on more than a strong sword arm. 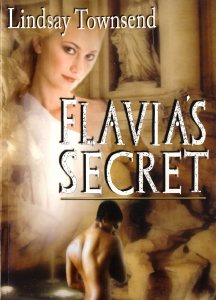 Historical Period:    Ancient Roman Britain, 206 AD
Synopsis:
Spirited young scribe Flavia hopes for freedom. She and her fellow slaves in Aquae Sulis (modern Bath) have served the Lady Valeria for many years, but their mistress’ death brings a threat to Flavia’s dream: her new master Marcus Brucetus, a charismatic, widowed officer toughened in the forests of Germania. Flavia finds him overwhelmingly attractive but she is aware of the danger. To save her life and those of her ‘family’ she has forged a note from her mistress. If her deception is discovered, all the slaves may die.
For his part torn between attraction and respect, Marcus will not force himself on Flavia. Flavia by now knows of his grief over the deaths of his wife Drusilla and child. But how can she match up to the serene, flame-haired Drusilla?
As the wild mid-winter festival of Saturnalia approaches, many lives will be changed forever.

Thank you for visiting and reading. As always, your comments are valued and welcomed.

Historical fiction novelist and a secondary teacher, Luciana Cavallaro, likes to meander from contemporary life to the realms of mythology and history. Subscribe to her free short story at http://eepurl.com/bhESs1