I’d like to introduce you to Linnea Tanner, author of Apollo’s Raven. We connected some years ago via Twitter. I read a number of her blog posts and began following her blog, Apollo’s Raven. It was wonderful to find another author who shared my passion and interest in Ancient History and mythology. When I learnt Linnea was writing about Celtic history in Ancient Britannia, an 5area of history I am not overly familiar with, I was very eager to read her book. You can read my review here. I also reached out to Linnea and asked if she would like to be a part of my Q & A series, and she said yes. Read on to learn more about Linnea Tanner.

Linnea Tanner weaves Celtic tales of love, magic, adventure, betrayal and intrigue into historical fiction set in Ancient Rome and Britannia. Since childhood, she has passionately read about ancient civilizations and mythology which held women in higher esteem. Of particular interest were the enigmatic Celts.

Depending on the time of day and season of the year, you will find her exploring and researching ancient and medieval history, mythology and archaeology to support her writing. As the author of the Apollo’s Raven series, she has extensively researched and traveled to sites described within each book.

A native of Colorado, Linnea attended the University of Colorado and earned both her bachelor’s and master’s degrees in chemistry. She lives in Windsor with her husband and has two children and six grandchildren.

Luciana: Can you explain where you got your inspiration to write Apollo’s Raven? 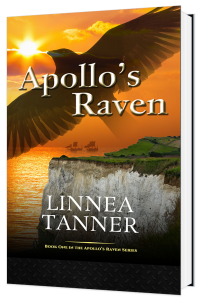 Linnea: As a young girl growing up in the 1950s, I was inspired by the myths and legends of powerful female warriors and sorceresses. In third grade, when my friends were reading Nancy Drew mysteries, I was devouring books on Greek and Nordic mythology. By eighth grade, I was reading adult historical fiction. I’ve always been drawn to bigger than life epic heroes and heroines and to mythology where gods and goddesses steered the fate of humans. Since then, it has been my passion to become an author.

In my travels to the United Kingdom, I was struck by the statue of Boudica and her daughters riding in a chariot.  She is celebrated as a warrior queen who united the Britons behind in a revolt against the Romans and almost threw them out of Britannia in 61 AD. The Roman historian Dio Cassius describes her as having mystical powers of a Druid.

“Let us, therefore, go against [the Romans], trusting boldly to good fortune. Let us show them that they are hares and foxes trying to rule over dogs and wolves.” When she [Boudica] had finished speaking, she employed a species of divination, letting a hare escape from the fold of her dress; and since it ran on what they considered the auspicious side, the whole multitude shouted with pleasure, and Boudica, raising her hand toward heaven, said: “I thank you, Andraste, and call upon you as woman speaking to woman … I beg you for victory and preservation of liberty.”

After doing more research, I became fascinated with the enigmatic ancient Celts— renowned warriors, Druids, and craftsmen. In preparation for writing the Apollo’s Raven series, I extensively researched and traveled to sites in the United Kingdom and France which are described in the first and upcoming books.

Luciana: Did you start with the title of your book in mind or did it evolve as the story progressed?

Linnea: The title of the book was at first entitled, “The Sword and the Raven.” However, as I began incorporating the fantastical elements to the story, I changed the title after I read the Greek myth of Apollo and his unfaithful human lover Coronis. The raven was initially white, but Apollo scorched it black out of anger when the bird delivered the message of his lover’s infidelity. The raven is associated with the Celtic war goddesses and is a harbinger of death in battle. It is also depicted as a messenger of the gods that easily travel between the mortal world and spiritual world.

In my novel, the raven represents the dual nature of Catrin, who has a darker side that she is trying to repress. Apollo is the patron god of her Roman lover, Marcellus.

Luciana: We connected and discussed our shared interest in mythology and ancient history through our blogs, social media and emails. What was it about Ancient Britannia that drew you to this particular period?

Linnea: I was intrigued that Celtic women were considered as equals in this war-like society. Roman historians wrote of their ferocity as they fought alongside their husbands. The time period of the Apollo’s series spans from 24 to 40 AD before the Roman occupation of Britannia led by Claudius in 43 AD. I was also drawn to the tragedy of Mark Antony and his son, Iullus Antonius, whose downfalls were associated with powerful women. Their infamy cast a shadow on their descendents which is further explored in Apollo’s Raven.

Luciana: The British Celts were an enigmatic people, their culture as mysterious as their origins. What was it about them that influenced you and what did you learn about them that you didn’t know before?

Linnea: Although the Celts are portrayed as war-like barbarians by the Romans, they were also artisans as reflected by their intricate craftsmanship that is dream-like and abstract. They had similar beliefs to the Greek philosopher, Pythagoras, who believed that humans could reincarnate into other forms. Julius Caesar attributed this religious belief as the reason Celts were fierce in battles and did not fear death. The Celts revered the head as the temple of the soul and thus believed they could capture an enemy’s power by keeping their skulls. I adopted their belief in the soul as a way to explain Catrin’s magical powers.

Luciana: How important was it that you travelled to Britain and followed the path of the ancient Celts and Romans?

Linnea: It is important for me to travel to the United Kingdom and experience the landscape as the ancient Britons did. I’ve hiked the hilltop of the Dover Cliffs to sense the eeriness of the fog swallowing the channel and the waves crashing against the sheer cliffs. A few days before my hike in the summer of 2012, a large portion of the cliff fell into the water that then appeared turquoise along the edges. The greatest enemy in Caesar’s military expeditions to Britannia was the unpredictable weather over the channel and changing tides.

I’ve also visited a rendition of a Celtic village in Wales in the fall and Colchester, the oldest known Celtic town, in the winter to get a taste of the damp weather. Farther north, I’ve walked the pathway along Hadrian’s Wall that was built to prevent barbarians attacking from Scotland. History seems to have repeated itself with President Trump insisting a wall be built to keep out illegal immigrants. A tale of caution, Rome was eventually destroyed from within.

Luciana: Is Catrin based on a real person from history, or a conglomeration of famous Celtic women?

Linnea: Catrin is a conglomeration of famous Celtic women from historical accounts and mythology. The most notable historical Celtic warrior queen is Boudica. Be it man or woman, the spouse that brought more wealth and property into a marriage was considered the ruler of the household. In the Irish kingdom of Connaught, the sovereignty of the land passed to Queen Maeve. Her consort, King Ailill, received his royal status by marrying the queen. Celtic women were not bound by the confines of monogamy even within marriage. Queen Maeve had an array of lovers, most of them officers in her army, so she could assure their loyalty.

One of the most interesting aspects of Celtic mythology is that the goddesses were associated with both fertility and destruction. Scathach is a legendary Scottish woman warrior who appears in the Ulster Cycle and trains the Irish hero Cuchulainn. Aife, the rival of Scathach in war, becomes the lover of Cuchulainn and gives birth to his son.

As the Apollo’s Raven series continues, Catrin will embody the multi-layer attributes of Celtic women described above.

Luciana: What do you hope readers will gain from reading Apollo’s Raven?

Linnea: I hope that readers are swept into the mystical world of the ancient Celts who treated women as equals to men and see how this contrasts with the paternalistic, empire-building Romans. It is my hope that modern women can draw on the rich traditions of the ancient Celtic civilization where women owned property and could become rulers and Druids. These women fought, hunted, rode horses and used bows and arrows, just like the men, to protect their homeland.

A deeper theme in Apollo’s Raven for readers to consider is do we truly have control over our destiny or is fate predetermined and history repeated. Would you be willing to sacrifice your love to perform you duty for your family and homeland?

Luciana: What is next in the pipeline? Book 2 I hope!

Linnea: The next book in the series is entitled, “Empire’s Anvil.” The political tensions heat up between the Romans and Catrin’s father, Amren. When he accuses Catrin of treason for abetting her Roman lover, Marcellus, she must prove her loyalty by forsaking all men and defending their kingdom, even to her death.

Forged into a fierce warrior, Catrin is tested to redeem herself in the eyes of her father. It is now more urgent she find a way to break the curse that foretells her banished half-brother and the Roman Empire will destroy their kingdom. Yet, when she again reunites with Marcellus, she faces her greatest challenge that could destroy her life, freedom, and humanity.

Luciana: Where can people buy your book?

Linnea: Click the appropriate button below to order your copy!

Luciana: Where can people connect with you online?

Thank you, Linnea for joining me today on Eternal Atlantis.

Thank you dear friends and followers for stopping by and reading.

What do you think? Cancel reply

This site uses Akismet to reduce spam. Learn how your comment data is processed.